Ministers of the Bayou Teche 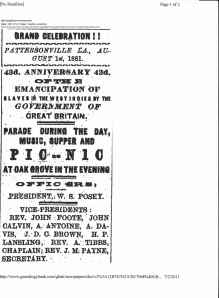 In 1881 a committee in Patterson La, consisted of several ministers was in charge of a parade and picnic

celebration of the emancipation of the slaves of the West Indies.  As of August 1834, all slaves in the British

Empire were emancipated, but still indentured to their former owners in an apprenticeship system which was

finally abolished in 1838. Rev. John Payne was the secretary of the committee and Rev. Anderson Tibbs

was the chaplain of the committee.

Vilmont Schexnayder and Julianne Unknown. I have Quillo as a her surname, by the way of the notary

trying to spell it as he heard it be pronounced while documenting Julianne’s pension affidavit. Julianne actually

Mary used “Antonia” as the last name for her in documents. Their father Paul was going by “Antonio” on the

1880 Federal Census. Leola Williams is a descendant of Rev. Tibbs, we have been corresponding for years

about researching Patterson Louisiana. This year I finally convinced her to do her DNA testing with 23ANDME.

Guess what Leola and I did the happy dance…we are cousins. Since there was no mention of Reverend Tibbs,

who was from Tennessee as being a relative in the pension papers. I had to inquire about Leola’s other

ancestors. Well Reverend Tibbs married Antoinette Vijoe of Patterson Louisiana. Is it just me, but do you see a

similarity of the surnames Quillo, Antonio and Vijoe.  It might be a possibility that Antoinette Vijoe might be

a sister or cousin of Julianne. But not to rule out the other surnames in Leola’s family, I will investigate them as

7 responses to “Ministers of the Bayou Teche”